All you want to know about nickel chrome plating

Why and were to use nickel and chrome plated rods

In extreme corrosion environments such as the ones close to a coast line or offshore platforms the passive oxide layer that covers the chrome plating is being attacked and destroyed in a much faster way than in normal conditions, thus allowing the corrosive agents to penetrate the chrome by using the micro cracked structure of the chrome (Pic.1), and attack the steel material that we are aiming to protect. In contact with the steel base, the corrosive agents attack the structure of the steel and through the same micro cracked structure releases corrosion products that deposit themselves on the exterior of the rods as rust or oxidation (Pics.2A & 2B).

Pic.2A – How corrosion is happening on a hard chrome plated bar

Such working environments require more corrosion protection, something that traditional chrome plating does not provide. A standard approach to address the increase corrosion resistance request is to apply a layer of nickel (around 10 µm) on the base material before chrome plating (Pic.3). This layer of nickel will “cut off” completely access from the corrosive agents to the steel base. The chrome layer will give way and the corrosion agents will penetrate the chrome layer by using the micro cracks, but once it will get at the nickel layer, advance of the corrosion agents will be stopped (Pic.4)

Fig.4 – How corrosion is happening and were does in stops in a nickel/chrome bar

How is nickel plating done?

There are two approaches currently being used in large scale industrial process regarding nickel plating:

The obvious questions here would be – what is difference in between the two and which one is best for my process?

Bellow we are going to try to explain how each individual approach for nickel plating works.

As it can be seen, there are fundamental differences in between the two types of nickel plating technologies / approaches, and while these are important aspects to be considered for the actual nickel / chrome platter (balance between increase speed of deposit the nickel using electroplating, the economy made by not using electrical power or complex machinery, the even distribution offered by electroless plating, or the thicker deposits possible by using electroplating, etc), these have no impact for you, the end user of the product.

What is important to the end user of the rods is that nickel plating increase resistance to corrosion, ability generated by the amorphous alloy that is free of any pores and / or cracks.

By themselves, both chrome and nickel offer a number of advantages and disadvantages. General nickel plating, while resistant to corrosion is subject to tarnish and has a lower hardness value (in between 500 – 700 HV0.1) than that of chrome. While much harder with hardness values easily reaching 900 – 1000 HV0.1, chrome is not as resistant to corrosion because of its micro cracks, but provides better wear resistance layer with excellent low-friction characteristics for the piston rods as exemplified in Picture 6.

Using nickel / chrome plating a rod will achieve great results when tested in salt spray conditions, results that amount to:

*All above mentioned results confirmed during extensive laboratory tests, tests performed and results evaluated as per ISO9227 and ISO10289.

If you have any comments, input or observations, feel free to share them here. I’d be happy to know your thoughts.

If you wish to be advised on my next posts and to receive additional material and updates soon, please leave your email-address here. 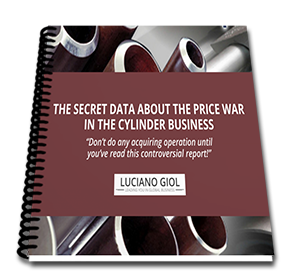 All the secrets of a hard chrome plating

In this article you will learn what a hard chrome plating is, how it is made, what is its structure and which are its advantages.

Hard chrome plating is a technological process that ensures a product has increased wear resistance, reduce friction, and most important, gives increase corrosion resistance to a metallic product aspect critically important especially in the hydraulics industry. Chrome plating is an ever changing or transforming process, one that has brought forth many improvements over the past few years, but also a lot of marketing “attacks” (example thousands of hours of Rating 10) – this will be something I will  write about in a future article.

How is hard chrome plating achieved?

Hard chrome plating is an electrolytic process utilizing a chromic acid based electrolyte, or easier still, coating of metallic chrome that is deposited electrolytic on a metallic material.

The process is quite simple and requires energy, chromic acid, big enough baths or lines (if working in continuous chroming) depending on size/lengths of chromed products and anodes.  In the chroming process, the product that is going to be chromed, becomes a “cathode” that gets through an “anode” that is found in the chroming bath. Thus, the chromium metal gets build on the metal surface that we want to chrome. A typical chroming process is made out of 4 different stages:

The chroming process depends on many factors:

The micro-structure of the chrome coating is influenced by how you managed to control the hydrogen evolution and the evolution of the chrome film being deposited on the cathode. Basically the micro-structure of the chrome coating is ranging from tight coatings with inner tension to tension free coating with up to 2000 micro-cracks per cm. The chrome is deposited in a hexagonal crystal, reorganizing itself into a tighter centered cubic structure, setting free the buildup Hydrogen. The pillar structure of conventional coatings implies hardness and crispness. The classic hard chrome coating is micro-cracked and tension-free but not tight. Chemistry controls the release of inner tensions and transforms them into micro-cracks measured as number of cracks per cm – as results we may conclude that hard chrome is inherently micro-cracked.

The structure of the chrome film is also affected by exactly the byproduct of the chemical reaction during chroming – the release of the hydrogen. Basically at a critical point, the hydrogen buildup will be released eventually and this will create a fine “exit” point on the surface of the chrome product, point that is prone to corrosion. In order to prevent such an issue, at regular intervals the hydrogen buildup is intentionally made to release itself by flipping the bar and by adding a circular movement on the bar.

Corrosion resistance is given by the chrome oxide that is being formed as a result of the chromic acid oxidizing the outmost surface layer. Basically the chrome oxide creates a fine passive film that acts as sealant on the total chromed surface – this oxide acts as “fillings” that “corks” all surface imperfections, pitting and micro-cracks, thus ensuring corrosion resistance. This oxide film is extremely thin up to 5nm and is vulnerable to certain types of wear, although the film is restoring itself in oxidizing environment. In order to potentiate the lifespan of this film, various treatments of the chrome surface are being carried out, such as chemical passivation or polymers.

Hard chrome is resistant to abrasive wear (moving particles plans away the surface coating) as long as the surface pressure of the abrasive particles are low. Limited space and hard particles can peel off chromium from the surface accelerating destruction of hard chrome coatings.

Hard particles hitting the coating with high speed in a path perpendicular to the surface can     lead to erosive wear and destroy the chrome oxide film initiating corrosion attack provided that the flowing media is acidic and reducing.

The chrome oxide layer provides low friction between hard chrome and other metals. However friction is also influenced by the roughness of the chromed raw material as hard chrome does not possess any leveling / filling ability at all, chrome just copies the aspect of the chromed surface.

At around 1000 HV0.1, chrome plating is harder than most industrial abrasives and steel counter faces. Unusually, it combines this hardness with a degree of toughness, so the deposit can stand up to high stress contact.

My next article will be released soon and will be related to the Corrosion Resistance.

If you want to learn how to achieve it, how to control it and why it is so important in the hydraulic business, please don’t miss my next post. 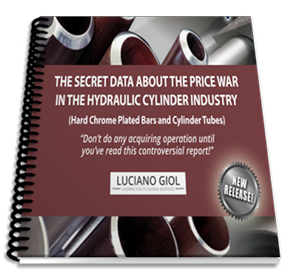